In the article “Salesforce Governor Limits: Is There a Way Past These Development Issues?” I suggested a few ways to solve to a problem with exceeding Governor Limits. Today I’d like to introduce another solution to the same issue, which, in my opinion, is far more efficient than the ones I already discussed. I’d like to talk about The Welkin Suite’s Apex Profiler.

The Welkin Suite’s Apex Profiler is a new feature that was first introduced in the version 0.29. Upon adding it, we are bringing the first stage of creating the tools for debugging the Salesforce apps to a head. This stage included:

With the help of these tools, each developer, who uses The Welkin Suite IDE, can debug their applications in the most efficient manner. In some cases, it is even possible to do so without the immediate access to the Org, on which the problems appear. In the future, we are planning to improve these tools (namely, to extend the functionality and make them more convenient and user-friendly), as well as to add new ones for the extended coverage. Nonetheless, today I’d like to focus on the Apex Profiler.

First off, let’s take a look at the way Apex Profiler works in The Welkin Suite. You can start profiling any unit test in two ways when your caret is placed within the unit test: 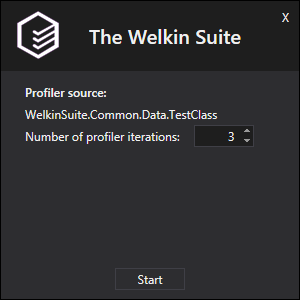 Please pay attention to the option ‘Number of profile iterations’. You can enter any number between 1 and 100 in this field. This parameter is highly important, especially for profiling Salesforce applications. As we all know, Salesforce response time may vary from one launch to another. Hence, to get a representational result, it is best to use the statistics received from multiple calls.

Upon launching, The Welkin Suite’s Profiler shows the statistics in the following window:

And yet, even this version of the Profiler, which is pretty basic so far, will let you solve the important everyday issues. Let’s take a look at the most common use cases, in which The Welkin Suite’s Apex Profiler will come in handy:

However, let’s not forget that in order to use the Profiler with maximum efficiency, you need to have the adequate test data (both in size and character). It is best not to cut back on this. I fully understand that most commonly, you have very little desire to handle the boring task of getting the data ready. But that’s for now. We are aware of this issue, and we will soon start working on the full-fledged data generator and mockups. So far, we’ve introduced the Data Loader in the version 0.29, so that you could upload the data you prepared directly from your main tool.

Check these features out and let us know what you think! We are always open to suggestions, and your opinion fuels the improvement of The Welkin Suite.