During the last month we've fully rewritten the logic for Code Completion. While not being a "new feature" this provides great possibilities for everyone.

From a user's perspective they are:

From TWS development perspective they are:

We have added ability to configure Code Completion behavior in the way you want, available options are:

While there's an option to disable this feature, we kindly ask you to report to us first if this is an annoying behavior so we can fix it and then only after that if it's still critically annoying - disable the feature until we release an update.

In terms of exact changes in Code Completion logic we'll just highlight some of the improvements in this release:

Also we'll be happy to know what exactly Code Assistance features you'd like to see (we have "Go to definition" and "Find all references" for Apex in our backlog already) - share your thoughts with us and we'll work on making them real. The Welkin Suite > Release notes Beta 3 Sprint 12 > Code Completion.png 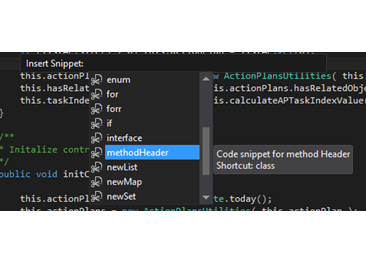 Second focus for this release was Apex Test Runner which we'd like to polish to an ideal state.
In this release we have added icons and text status for regular test jobs (previously they were displayed only for jobs that were started as a "deployment validation") and we fixed an issue with the jobs sorting order in the Test Results panel.
For both regular and "deployment" apex test jobs we have also changed the status text description, now it looks like this:

We hope that this change will make it easier to read the test results in less time.
And finally we have optimized the process of loading test results - details about apex test methods are now retrieved from the Salesforce org only when you expand a test class (e.g. on-demand), previously they were retrieved immediately when available.
This approach will surly increase the Test Runner performance and reduce the number of API calls to Salesforce.

Code snippets have been added which allow you to insert commonly used expressions using the Code Completion. In the Code Completion list, you will notice such things as "for" - selecting them will automatically insert a block of code with changeable parameters which can be easily edited. Additionally you can press the CTRL+K+X hotkey and select any of the snippets that you'd like to insert.

In the last release we created an incredibly helpful Local History which tracks the changes in the project.
Based on your feedbacks, we have improved the naming of versions for some situations, such as:

For versions that are relatedwith these changes, the "item" word has been changed to the actual file name that was affected in the corresponding version, thus it will be easier to find these changes in the history. The Welkin Suite > Release notes Beta 3 Sprint 12 > LocalHistoryItemLife.png

Of course we fixed a few other bugs:

For the next release we are going to focus on under-the-hood performance improvements as well as some other small features and updates.

Day by day we are working to make The Welkin Suite the best platform for force.com development. But it's impossible without your help. Write down a few words about your experience with TWS or about desired features on our forum so we will know better what exactly requires some more love from us to make your development process better.

Download and try The Welkin Suite yourself. P.S.: Finally we've got comments working, so let us know what do you think about this release.