Our team frequently gets "homework assignments" from the community - either by suggesting features and improvements or by lettings us know about bugs or "strange behavior" in certain cases. Today we'd like to provide you with our latest homework - The Welkin Suite Bloom R31 and Blaze R24 with a bunch of fixes and improvements that you've recently reported to us. Read more and assess our homework 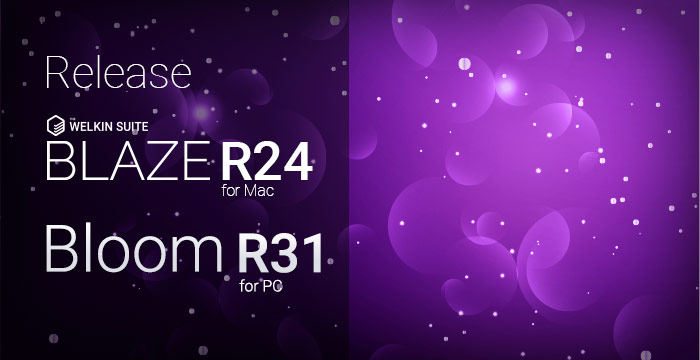 The first group of fixes is related to different operations with Lightning Web Components and Aura Components.

Some users had enough luck to experience incorrect behavior of the IDE when opening Aura component bundles, that somehow appeared to miss a .cmp file - the IDE just crashed. As our possibilities are slightly limited for such bundles, we've removed such components from the list in the Lightning Bundles Explorer, and when trying to open items from such "bundles" from the Solution Explorer - individual files will be opened instead of a "bundle editor".

Another fix will be also relevant to Aura developers, especially if they work with any kind of source control. Previously The Welkin Suite IDE was not downloading -meta.xml files for Aura bundles, so some users might have experienced issues when syncing their codebase with repositories. Starting from now on, the IDE will download and update -meta.xml files for Aura bundles, however, they won't be displayed in the Solution Explorer (e.g. they'll only appear in your file system in a bundle's folder). If such approach won't work for you and you'd like to see such -meta.xml files in the Solution Explorer as well - drop us a few words in comments, and we'll reconsider this option.

The last issue in this group is related to Lightning Web Components deployment. It appeared, that the IDE failed to deploy your components that had a reference to any object (unless you updated both of them and deployed them together). This behavior is fixed right now, and it works exactly as expected - deployments succeed

Today we are finally releasing a handy improvement to one of our favorite SFDX features - the ability to import/export data to/from scratch organizations in JSON format. This great feature allowed all of us to store sample data in repositories and to easily manipulate with cross-object references without doing anything special (bye-bye Excel's VLOOKUP). If you remember - The Welkin Suite allows you importing and exporting data in JSON directly from the UI instead of typing commands in CLI, however, this was true only for simple imports. In the Bloom R31 and Blaze R24 versions of the IDE you can now easily import data to your scratch orgs using plans without commands. Just right-click on your JSON plan file int he Solution Explorer and select the 'Import sObject Tree Data plan' action. 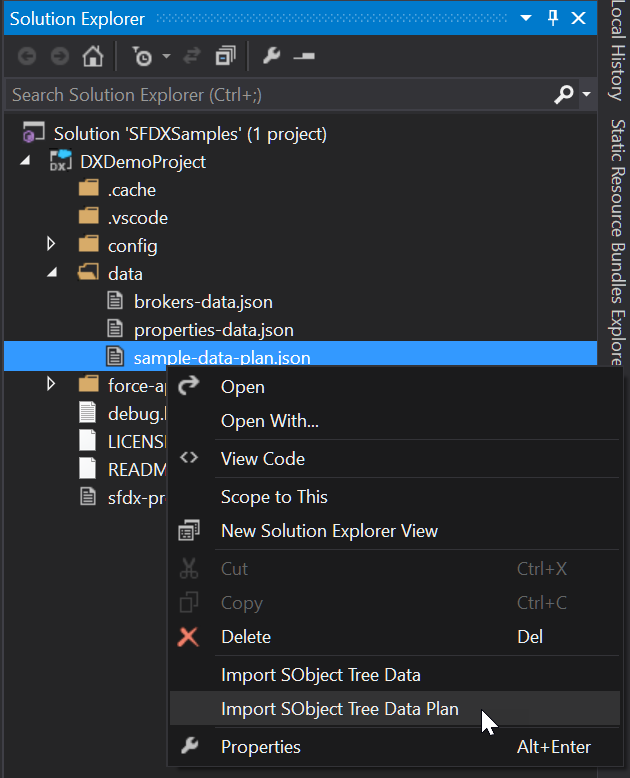 Additionally, we've fixed a small issue in the Scratch Org creation wizard - we've previously blocked you from creating Scratch Orgs with 30-days duration value by limiting it to 29 days

One of the longest-running operations is the initial project retrieval from Salesforce - there's a lot of metadata that we need to download from your Salesforce organization, and depending on your project and settings it might vary from 20 seconds for a tiny project up to 10-15 minutes for a huge project with tens of thousands of files in it. Instead of guessing and worrying if all's good with the download process, and to know if you have enough time for a small Trailhead unit, or no - we've completely redesigned The Welkin Suite's indication of this process. 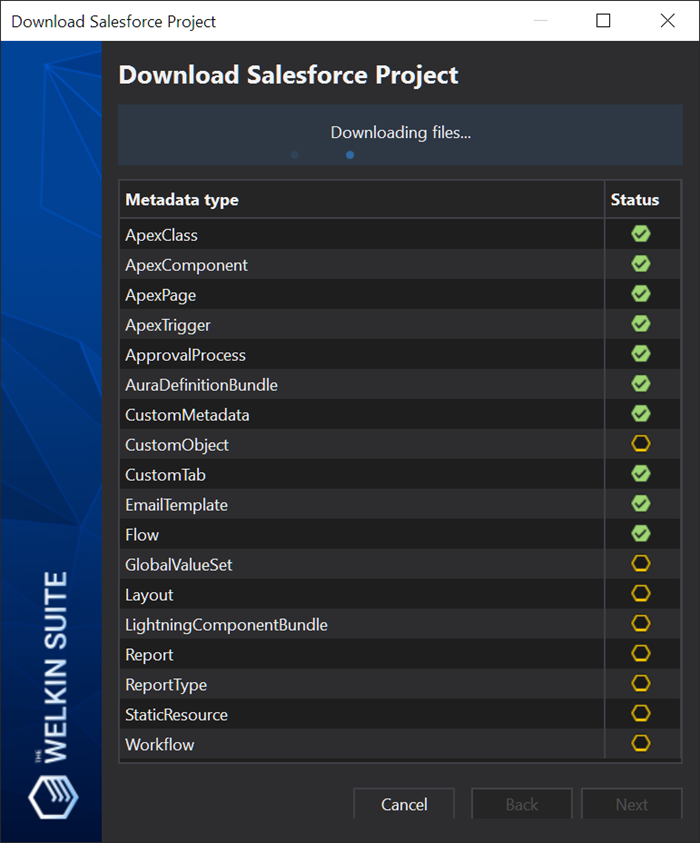 Now, when The Welkin Suite will start downloading your project files from Salesforce you will see the list of metadata types that you've selected to include to the project with corresponding status information for each of them.

Once all of them will turn green - you can proceed and finally start working on the project. In a case of errors during this process, you will clearly see what metadata components failed to download, but you'll be able to proceed anyway. After your project will be created and opened - you'll be able to try pulling the project from Salesforce, and The Welkin Suite IDE will try re-downloading that failed metadata, so you won't waste your time by trying creating a project over and over again.

We've also applied a fix for situations when Workflows and Layouts were deleted from a project on the first pullafter creating it (and downloaded again on the second pull). These unneeded actions won't happen anymore.

Another small improvement might be handy for those of us who copy-paste credentials when creating a project. It's a very common situation to copy extra spaces before/after you password/username/token - now it won't be a problem, as the IDE will trim these three fields and will remove unneeded spaces at the beginning and at the end.

Other Fixes and Improvements

One of the "quality of life" small improvements in this release of the IDE will be interesting for those developers and admins who use multiple displays. Previously some wizards and windows in the IDE were opened on the 'Main' display, no matter if the IDE was on it, or on a secondary display, however, this behavior was not ideal for many users, so all wizards and windows now open on the same screen where you have the main window of the IDE. Windows that we've updated are:

You might have noticed that we've released two nice features in the previous release - an ability to mass delete Debug Logs from an organization, and an improved Validation Rules editor. Unfortunately, there were 2 small issues there that we've fixed today:

The last fix in today's list is Mac-specific, as the issue was present only in the Mac version of the IDE. When working with the 'Deploy to another organization' wizard on the component selection page - the IDE might have checked unneeded additional components after you've applied filters to a list of components. This behavior is fixed and no matter if you apply filters or now - the list of components selected for deployment remains the same.

We hope you'll find this release helpful and you enjoy working with The Welkin Suite IDE. If there are any issues that we're missing, or if there are any cool features that you want to see in the IDE - we're carefully listening, and we want to get better with each update.

The Welkin Suite
Developer friendly Salesforce IDE
Try Now For Free
Multi-project for Mac, and other updates for both Bloom R32 and Blaze R25 Previous
Easier Validation Rules configuration in The Welkin Suite Next