The Welkin Suite team has a sweet Christmas present for you. Please meet Spire R6, which is dedicated to improving the Code Assistance functionality for Apex. Now code completion suggestions have become more accurate and fluent. This way, your coding performance can be even higher, and the IDE will make your working process easier and more pleasant. 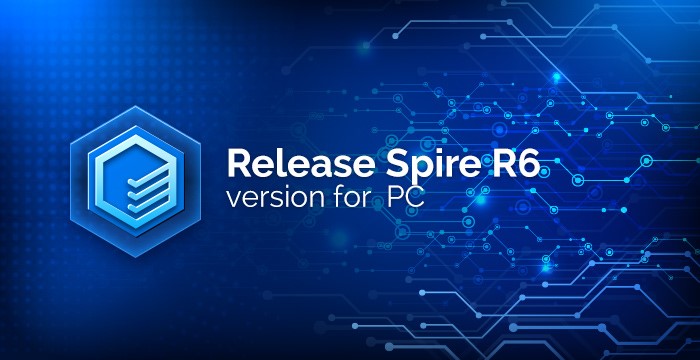 All the Code Assitance changes in details and, of course, several other ones are described below. Please enjoy your reading, and hurry to give them a try inside The Welkin Suite IDE.

First of all, we would like to tell you that Code Completion has begun to work better due to the context with more precision. This means that as of now, the suggestions in it are more reliable and accurate regarding the position in a class. This is achieved owing to the following changes:

All these changes affect the content of the Code Completion suggestions list, and related options like search, inserting, highlighting. The whole editing process is based on the results of the work of TWS parser. In th future, we plan to continue the work on improving code analysis, which is the groundwork of the Code Assistance functionality.

Code Completion is one of the most important parts of the Code Assistance functionality. However, there are other options and possibilities to improve your working process inside The Welkin Suite IDE. Here you can read what we have changed, improved, and fixed in Spire R6:

In The Welkin Suite Spire R6, we paid our attention to other functionality of our IDE as well.

Since the set of the debug levels for logs on Salesforce was changed, our developers have made appropriate changes in the settings in TWS. Now when you use the 'Configure Debug Log Levels' option, you will be able to select the same levels that are available for you on the Org. In addition, the new button 'Set Retrospective Debugger Log Levels' is added, so there is no need to change the level for each category step-by-step to configure them for debugging - you can modify them in one click, and continue your working process. 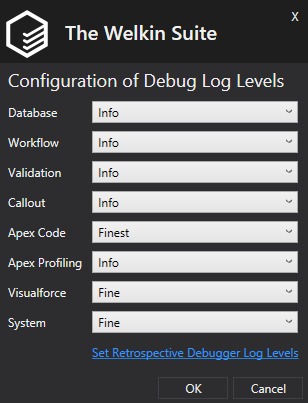 Additionally, when you start debugging from a log file, and the log levels are set lower than required ones, you will get the appropriate message with the list of the required debug log levels: 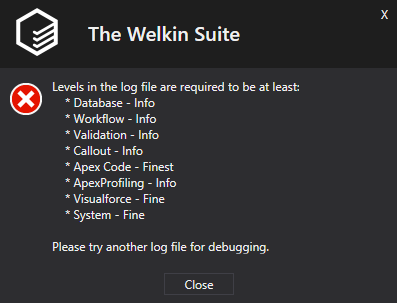 We have made another update related to the Apex Debugger. Previously, when you were debugging Apex controllers, you could be redirected to a Visualforce page file instead of the correct Apex class file. Now this issue is resolved, and you can safely debug Apex controllers.

The next set of fixes is dedicated to filtering in the 'Run Tests' dialog. When you have used the filter to get only some of your tests, and then enabled the checkbox next to the project with the selected items and run tests, all of the tests from your project were run, not only the selected ones. We have solved this case, and this will now work correctly. The next update has been made for the case when you are filtering test list from an Organization with a lot of unit tests - in such cases, there was a chance that TWS could freeze.

Moreover, filtering in the 'Project Metadata Components' wizard could previously cause the error 'We could not get metadata. Please retry again later.'. The logic of filtering was re-implemented, and all the necessary metadata is processed correctly.

We have improved the project structure synchronization functionality. This mechanism looks the same way from your side, however, some internal changes will help you avoid potential issues. The same functionality was implemented in the Beta 5 version of The Welkin Suite for Mac, so now you can share your project structure between TWS project on both platforms.

When you've used OAuth authentication, you probably could have been faced with the issue with the lack of an option to re-authorise to an opened project that has the expired credentials right after TWS was started. The reason for the issue was as follows: when the license identifying window was closed, the window for the repeated authentication was closed as well. Now these windows appear separately, and one has no effect on another. In addition, an issue appeared with hotkeys and functional buttons stopping to work on the project that was created using the OAuth authentication. We have found the reason for this, and fixed it.

At the end, maybe one of the most awaited changes is done for the 'Format on paste' option for Visualforce and Lightning Components. When you work on a file in the built-in HTML editor, and paste some text into your code, the uppercase was changed to lowercase. This was especially important for Lightning development, which could be failed to build because Aura framework is case-sensitive. Currently, we have disabled this option by default.