In real life, it's usual the case that lots of people are working on the same project and also with the same Salesforce orgs. And as a rule the more people that are working on a project the more sync issues may appear - saving the working code, finding out what has happened to your perfect code and so on. One of the common ways to reduce the number of such issues is to use a Version Control System.
This why we have implemented a built-in Git support into The Welkin Suite, together with some huge under-the-hood improvements for teamwork 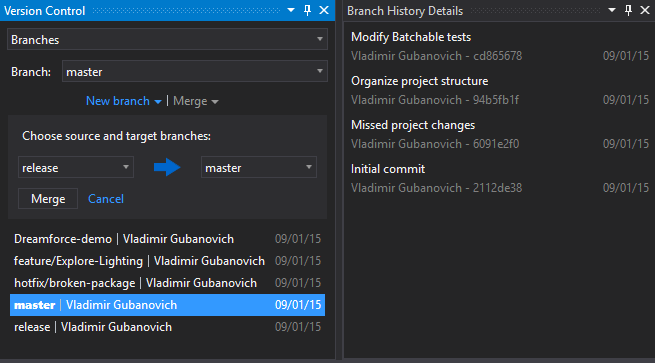 Before we proceed to the release notes themselves, we'd like to invite all our users and those who are interested in TWS to meet with us at the Dreamforce'15 and come see our 2 sessions there. Or you can visit our booth in the DevZone.
We will be happy to answer any questions, perform demonstrations, and discuss our future plans and community ideas with all of you.
You can find more details about our plans for Dreamforce in our earlier blog post.

First of all we have improved the core organization of projects in TWS - no matter what VCS you are using you will notice this changes.
Previously The Welkin Suite maintained a separate folder with service information about the project - when each file was changed locally and on the org, hashes of the files and so on. This information was used for build and pull process optimizations. The more of such data that we have locally, the less requests we have to make to Salesforce and the less data that should be uploaded and downloaded. However this approach was causing some difficulties when projects were moved across - either just copied somewhere or because of using VCS.

In the current release we have changed almost everything about this service information:

Please note: Because of all these changes projects that were created in the previous versions of TWS should be converted to the new format. The migration wizard will pull all changes from Salesforce and users will have to resolve all conflicts before they will be able to work with the project.

Starting from today The Welkin Suite have built-in Git support. This means that if your project is located in a folder with a Git repository - you will be able to perform the most common actions right from the IDE without switching to the other applications.
In order to access the Git functionality you need to open the Version Control panel from the Main Menu - View -> Show Version Control.

In this panel you will have an access to the following views:

Additionally there are 2 views which are not shown in the views dropdown:

With all this you will have full control over the changes from the IDE directly.

However there are some limitations at the moment which we will work on in the future:

Apart from working on the teamwork improvements we've added some final touches to the TWS UI:

We hope to bring one new small (but nice) improvement and some bugfixes right before Dreamforce. If you want to get more info about our plans after the Dreamforce - watch our sessions.

Download the new version and try this yourself! If you're an existing user - this update will be delivered automatically very soon.

Let us know what you think of this release, The Welkin Suite itself, or your experience with it. We'll be happy to see you in the comments, on the forum, or in social networks!